For many people, September heralds the start of Pumpkin Spice Latte season. And don’t get we wrong, I am an unabashed fan of all things pumpkin spice (can’t wait to get my first PSL soon!). But for me, September is also a very special time of year for mooncakes.

What is a mooncake?

A mooncake is a traditional Chinese pastry eaten during the Mid-Autumn Moon Festival. It has a thin pastry coating filled with a variety of sweet fillings, from lotus seed to sesame paste to my personal favorite, red bean paste. Within the filling, there will often be nested a salted egg yolk that represents the round full moon.

If you’re not familiar with Asian desserts, these flavors may sound strange to you. 4 year old me definitely was not a fan of eating salted egg yolk mixed with bean paste. But I promise – mooncakes are delicious.

Yes, they’re also super rich and highly caloric (up to 1,000 calories for one!), which is why September / October is the ONE time of year I will gorge myself on these lil treats and then not touch them again until the next year.

Over the years, many different variations of mooncakes have popped up, from delicate mochi-based “snowskin” mooncakes, to flaky and buttery French-style mooncakes. The mooncake that I always ate growing up is a Cantonese-style mooncake, and that is the mooncake-making process I’m detailing in today’s post. 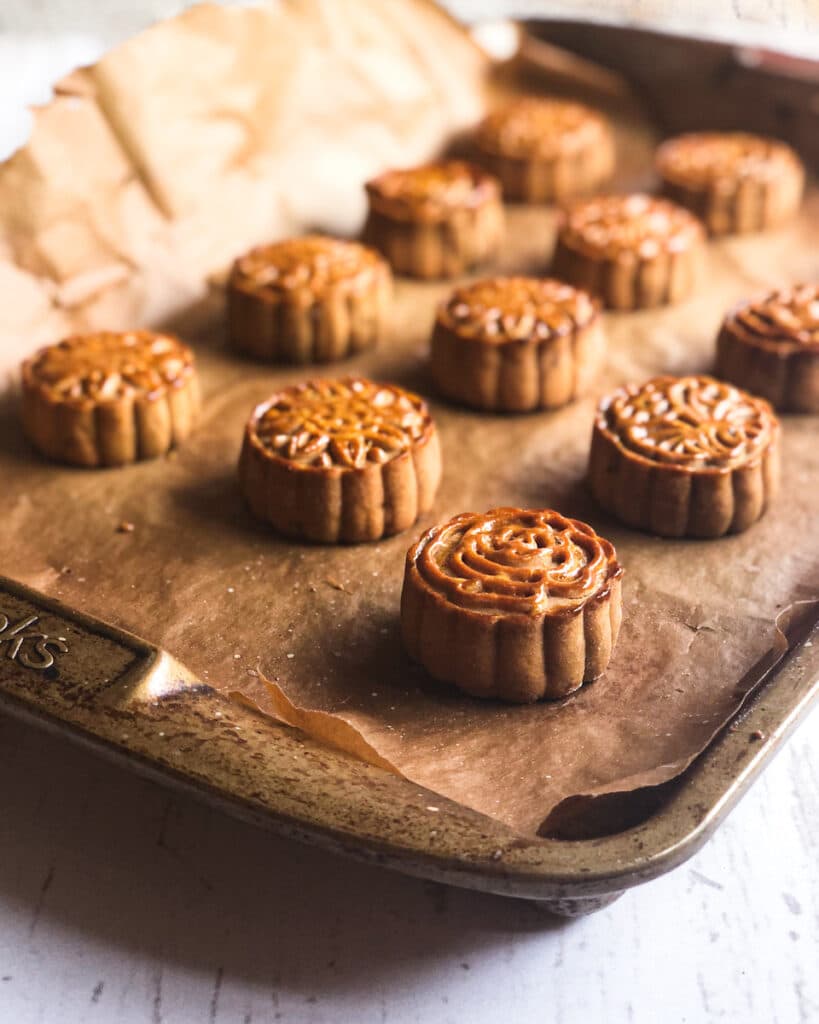 Is it common to make mooncakes during the Mid-Autumn Moon Festival?

It is very common to eat and give mooncakes during the Mid-Autumn Moon Festival, but it is actually less common to make them at home. That is because they are painful and time-consuming to make. If you are giving away 50 – 100 mooncakes to your family, neighbors, and friends you might as well save yourself the trouble and buy yourself a box of commercial mooncakes.

I decided to make mooncakes as a bit of a technical challenge. They have a lot of sentimental meaning to me, and they are also just beautifully patterned.

I used this recipe from the Omnivore’s Cookbook: https://omnivorescookbook.com/traditional-mooncake/

It’s a very long, very detailed, and rather intimidating post. The author repeatedly mentions how traumatizing the mooncake making process was for her.

You can usually find both at your Asian grocery store, but the catch is that commercially produced kansui and golden have differing ingredient levels, and as a result can react differently in your dough. To have total control over the process, I made the kansui and golden syrup the night before making the mooncakes. 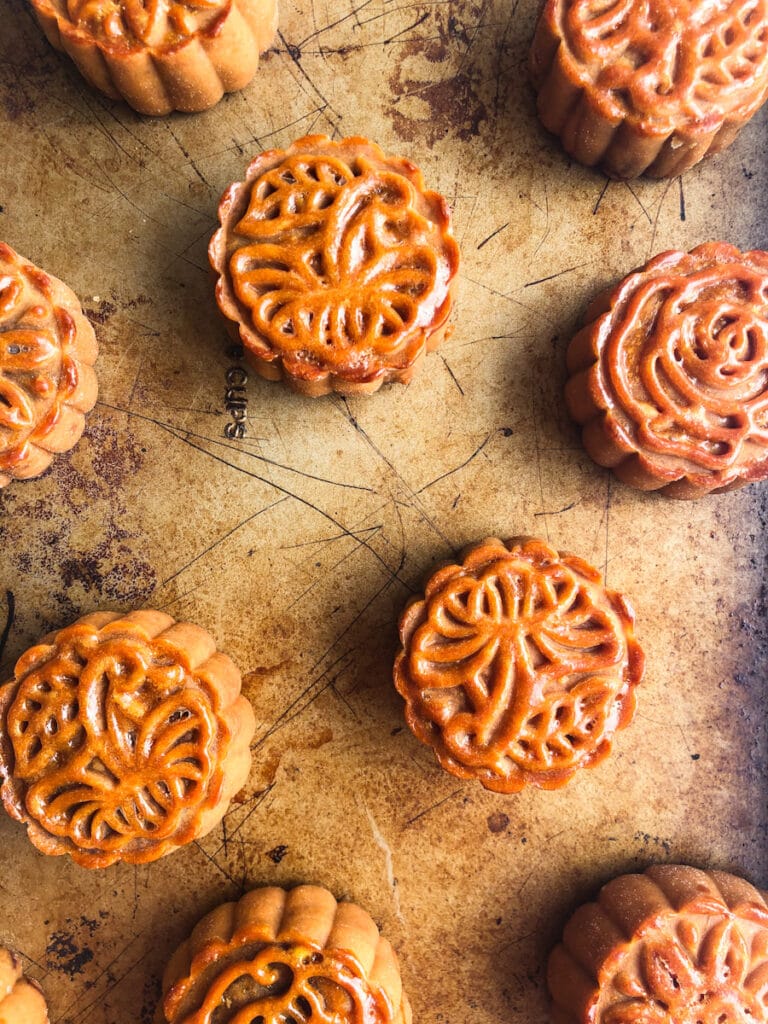 Because I was spending a decent amount of time making homemade kansui and golden syrup, I opted for store-bought red bean paste with flaky sea salt to cut the sweetness. I spooned out 2 tbsp-sized mounds of red bean paste and let them chill in the fridge for at least 5 minutes before using.

I bought an assortment of mooncake molds from Amazon, that master supplier of all things. I used the smallest 50g round mold to make my mooncakes.

I used 2 tsp-sized mounds of mooncake dough for each mooncake, rolling until about 4 – 5 inches in diameter. After putting the filling in the middle, I’d gently pinch the ends close, sprinkle liberally with flour, and roll in the palm of my hand to form a sphere. I’d then place the sphere into the mooncake mold, and press down firmly.

I won’t lie, shaping the mooncakes was a long and tedious process. 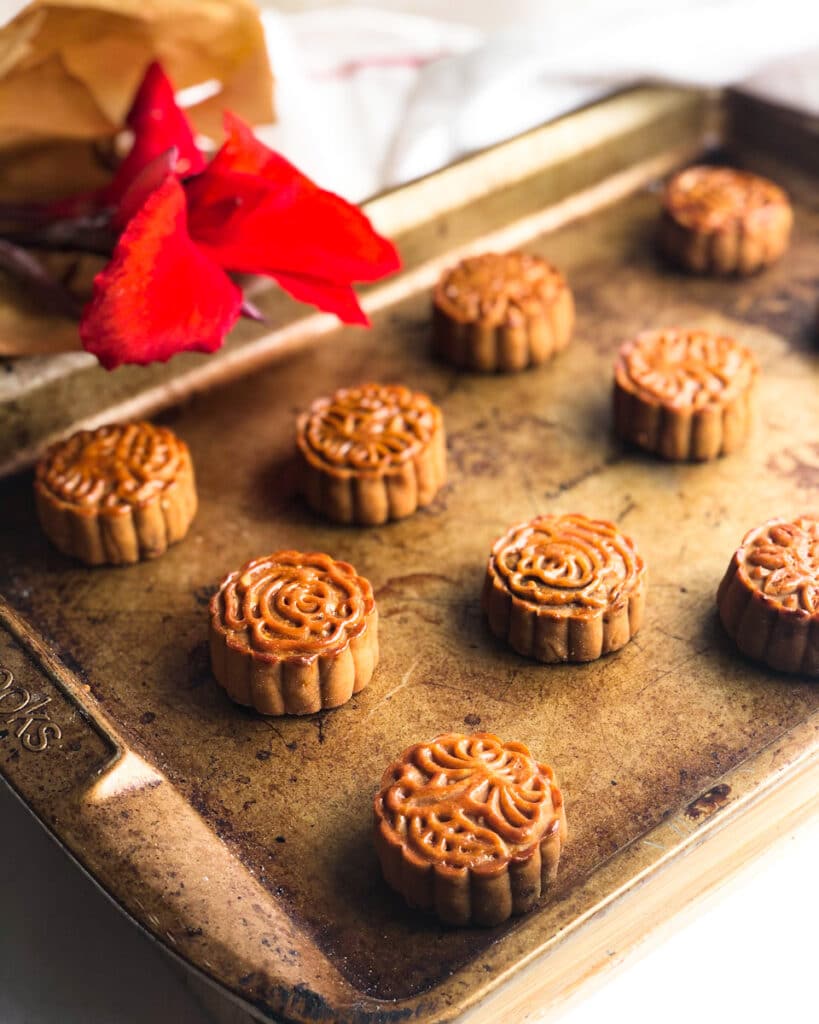 In total, including making kansui and golden syrup, the mooncake process was around 3 – 5 hours. I did think that my final mooncakes turned out beautiful, and they tasted just like the storebought ones. After letting the flavors meld for a day or 2, I’d say they even tasted marginally better than the storebought ones.

What I think went well

What I would do differently 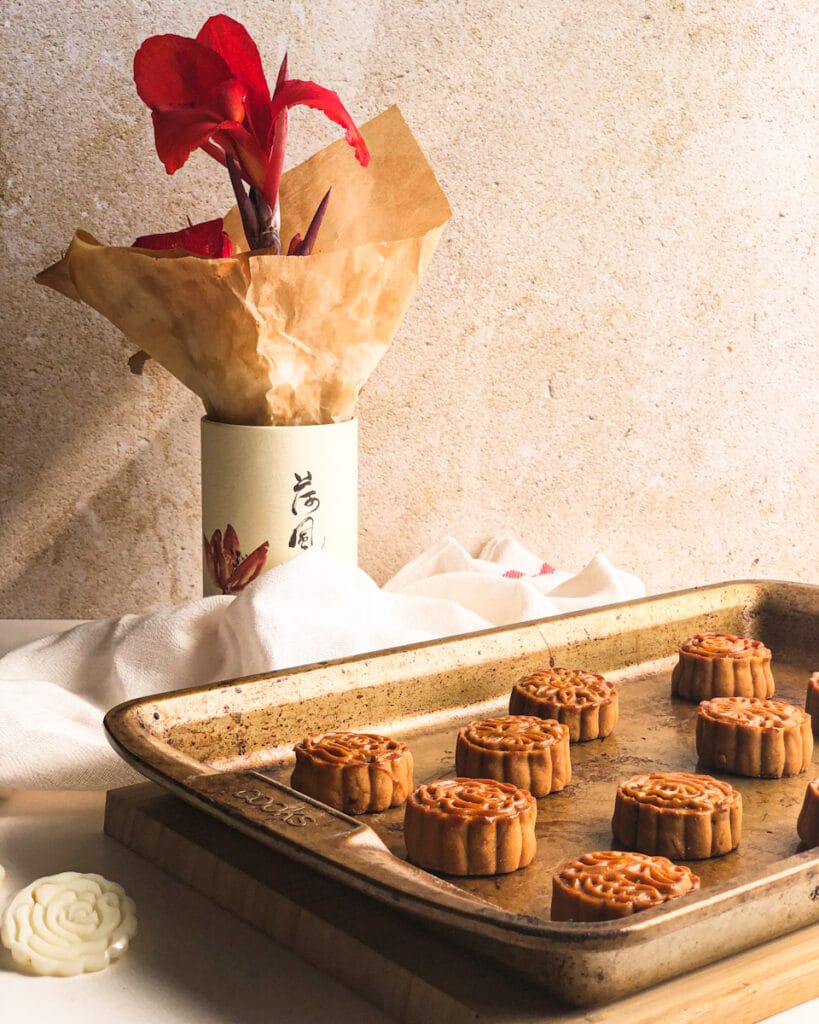 Would I make these mooncakes again?

Maybe? They did take an awful lot of time, but it did feel relaxing to just sit and mold mooncakes. They also tasted pretty good, and I think they would ship well if I wanted to give some away. Before making Cantonese mooncakes again, I’d try my hand at making snowskin mooncakes first, which are supposed to be less time-intensive.

Have you ever had a mooncake before? Or have you ever made one? Let me know in the comments below!

If you enjoy reading about my pastry escapades, check out my bread diaries series, where I tackle different bread challenges and experiments.

Sourdough scallion pancakes will always be my go-t

This brie-stuffed milk bread wreath is the perfect