We’ve all heard that the key to baking great artisan bread is a Dutch Oven. Don’t get me wrong – I have a Dutch Oven, and I love it. It helps me turn out beautifully puffy and crusty loaves of bread every single time.

But alas, there are limitations to a Dutch Oven. And I’m here to tell you that you do not need a Dutch Oven to make a bangin’ loaf of sourdough (or really any crusty) bread.

First, they are pretty freaking expensive, even if you get a “low-end” model. If you decide to go high-end, a 7 qt Le Creuset can set you back $400. (Do any of you have a Le Creuset? Can you please tell me if it’s worth selling my left kidney in order to purchase one?)

Second, they can really only bake 1, maybe 2 (small) loaves at a time. I’ve spent nearly 3 hours baking 4 loaves of sourdough because I couldn’t get them all to fit in my trusty Dutch Oven. (They did come out beautifully)

Finally, Dutch Ovens are really not portable. They are incredibly heavy and if you packed one in your carry-on, TSA would think you’re trying to smuggle a cast iron bomb on board your flight. Inevitably, you will go in vacation, want to bake a loaf of bread, and be without a Dutch Oven.

A recent, Dutch Oven-less trip (I had the foresight to pack my sourdough starter) let me reconsider the question: how can I bake beautiful, crusty, artisan bread WITHOUT a Dutch Oven?

And this wasn’t the first time I’d asked the question. Earlier on in my baking career, I was far too cheap to invest in a Dutch Oven and spent 3 hours Googling “how to bake crusty bread with only a cookie sheet). I didn’t find the answer.

But now I have it. And I am here to share it so everyone can bake beautiful, delicious, crusty, artisan, perfectly puffed bread without a Dutch Oven.

Let’s level set – why is a Dutch Oven so great anyways? 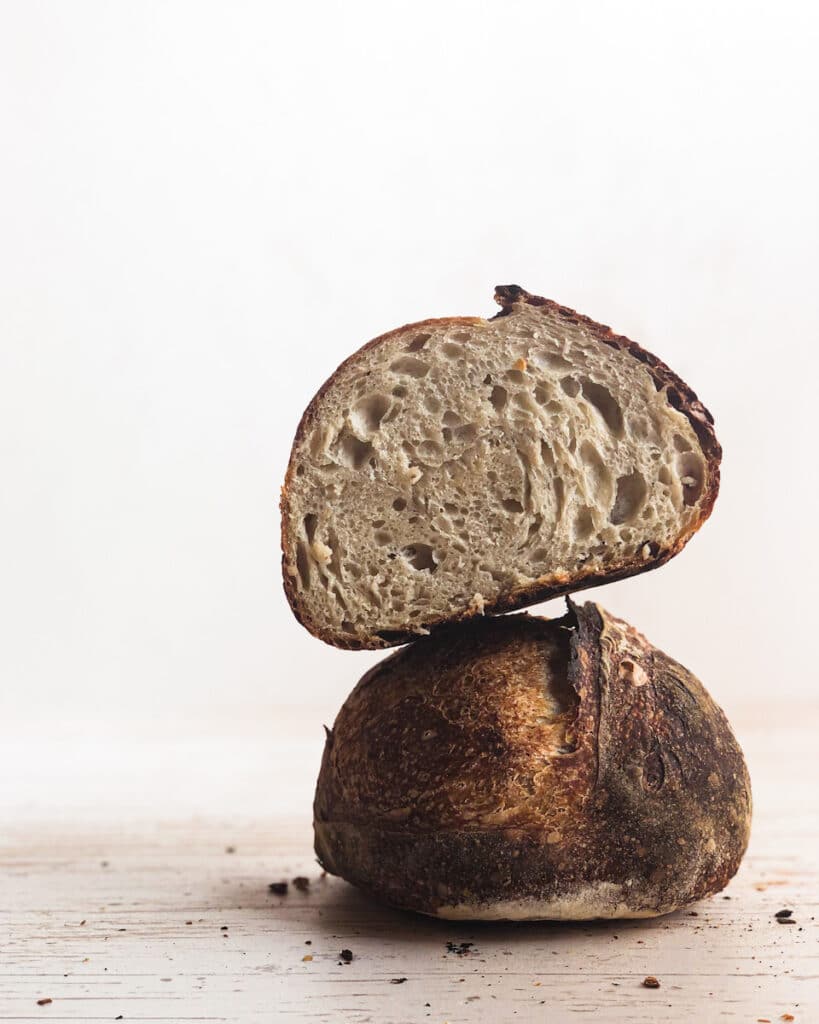 Dutch Ovens are fabulously wonderful for baking bread because they are 1) really great at trapping steam and 2) provide an extra toasty warm environment for the bread. A lot of fancy professional ovens inject steam to create the perfect bread baking environment, so in a sense you can think of Dutch Ovens as a steam injection hack.

As a bread baker, you want your loaf to achieve two things:

The warm temperature from the Dutch Oven can help with oven spring, and the steam is key for both oven spring and crust formation.

Oven spring is the term for the first 10 or so minutes your loaf is in the oven where your loaf rapidly grows and expands. This is because the warm temperatures encourages yeast to produce a last burst of activity (before dying and being entombed in your loaf) and causes gas bubbles to expand. Adequate oven spring helps your loaf become puffy and airy. If you’re a sourdough baker, this helps you get that coveted “ear” on your loaf.

Steam is integral for oven spring because it keeps your crust moist and hydrated. A moist crust is a soft crust that is able to expand with your loaf. Without steam, the crust hardens too quickly and limits your oven spring, causing the loaf to burst in weird places.

A warm, pre-heated Dutch Oven helps with oven spring by further encouraging yeast activity and gas expansion early on in the bake.

As the surface of the dough heats, starches at the surface begin to absorb moisture and gelatinize (wowza!). This starch gel is what becomes the crust. The more moisture / steam you have, the more gel is formed, leading to a crisper crust.

I did a series of experiments to try and imitate the temperature and steam capabilities of a Dutch Oven.

Experiment 1: boiling water in a tray at the bottom of the oven 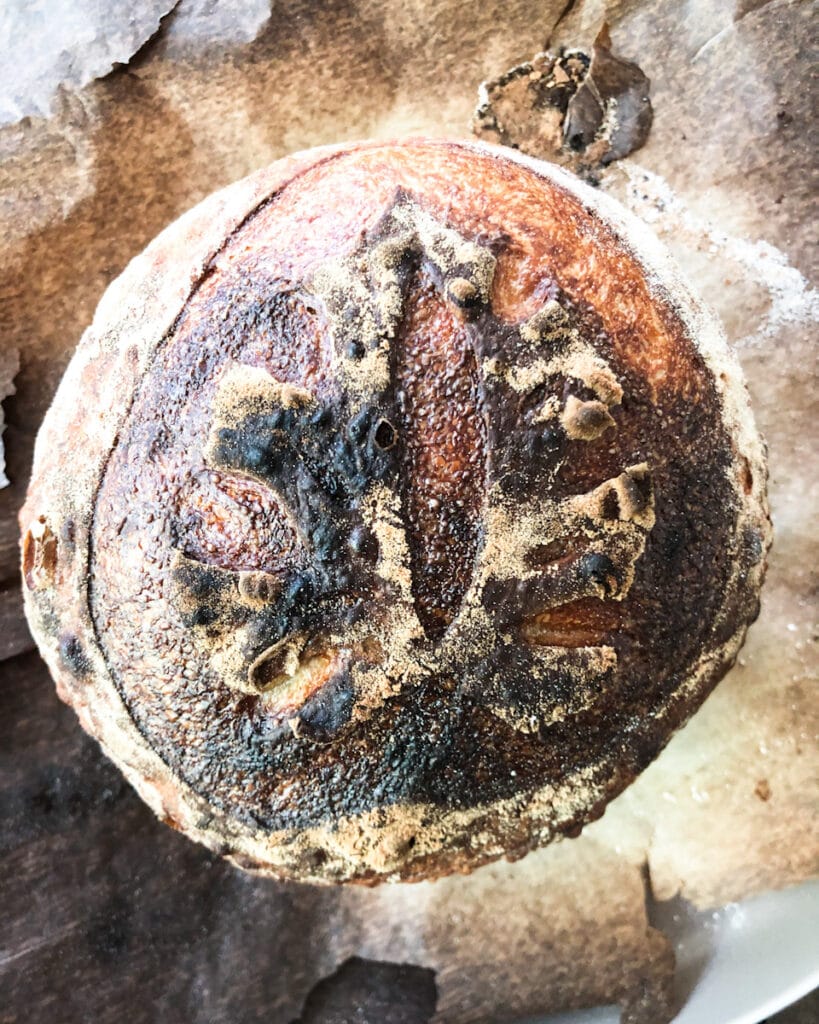 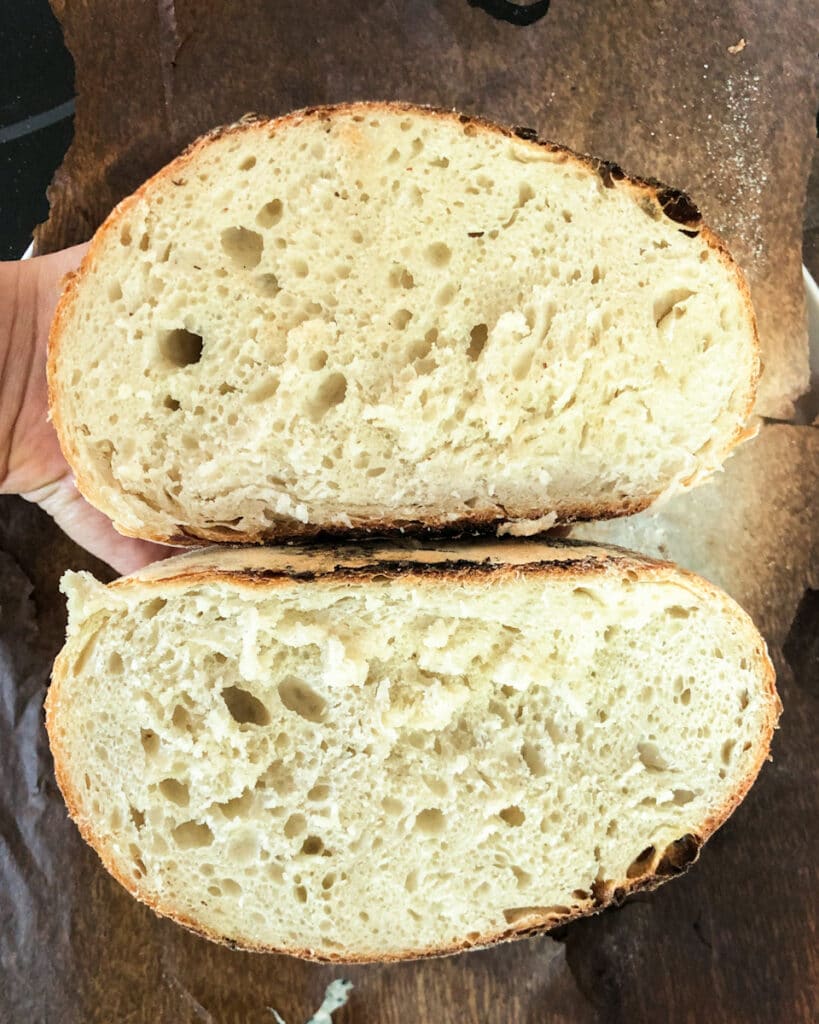 Experiment 2: Pre-heated the baking sheet, plus boiling water in a tray PLUS ice cubes

The idea: Create extra heat to encourage oven spring by pre-heating the baking sheet, along with even more steam from ice cubes!!

The outcome: Pretty similar to loaf #1, where the crust had burst. I realized I needed a cover over my loaf both to protect it from the heat of the oven and to trap all that lovely steam.

Experiment 3: Pre-heated the baking sheet, placed ice cubes near the loaf, and covered everything with a giant aluminum baking dish

The idea: Mimic a Dutch Oven cover using a disposable aluminum baking dish. Place ice cubes inside the dish to create extra steam without needing a tray of water.

The outcome: Bingo! This loaf had a beautiful oven spring and didn’t split at the bottom. The crust was the perfect golden brown.

Was it actually the same as a Dutch Oven? 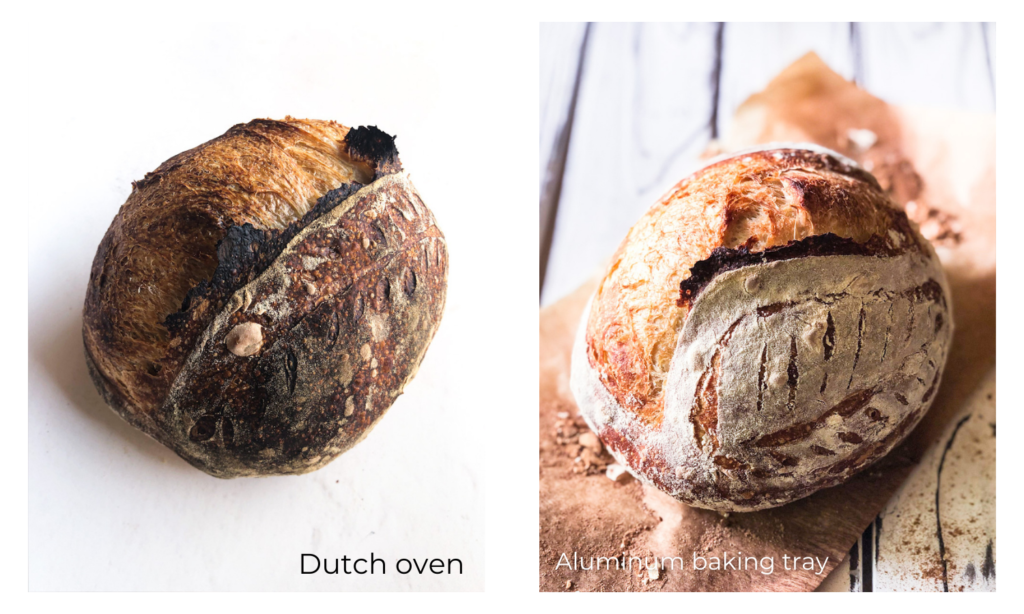 When you look at the outside of the loaves, the result is pretty comparable. The loaf baked in a Dutch oven is slightly rounder with more blisters. 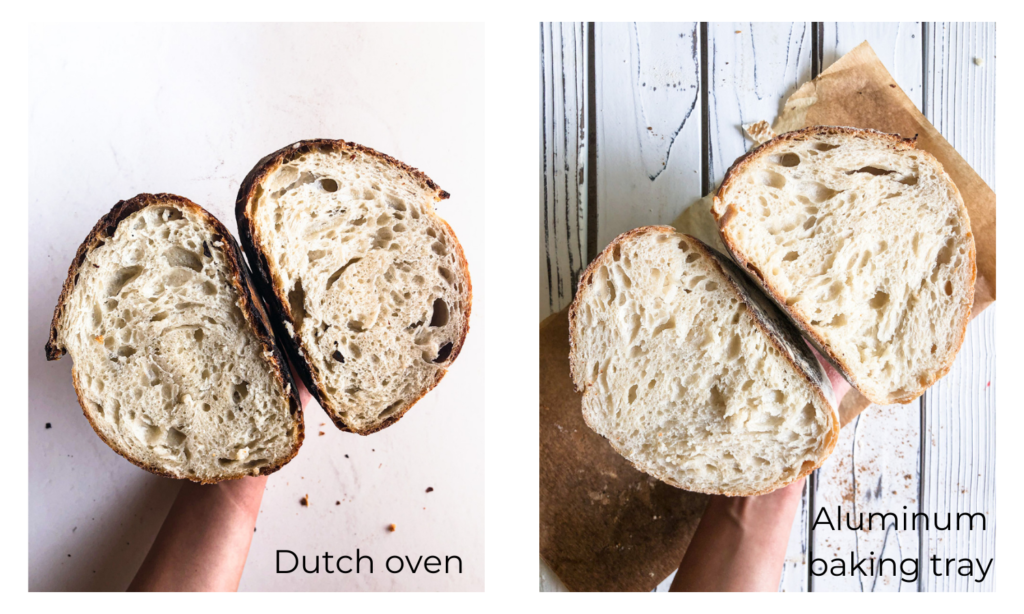 When you look at the inside of the loaves, you can see the loaf baked with a Dutch Oven had a slightly better oven spring, resulting in a rounder loaf with bigger air bubbles.

That being said, I would use the aluminum tray method again if I had to bake multiple loaves at once.

Do you bake bread with a Dutch Oven? If you try this method, let me know in the comments below! Or you can tag me on Instagram with @halicopteraway or #halicopterway.

Recipes to try this method with: 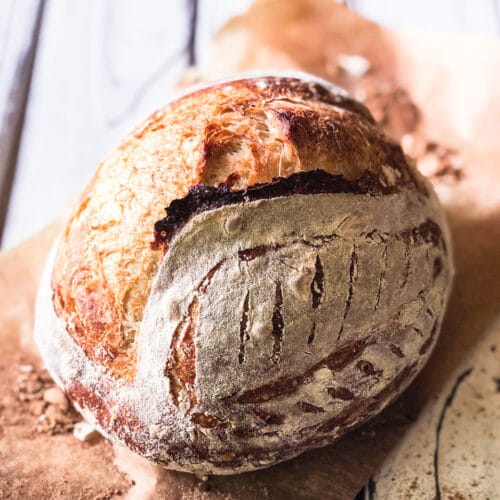 How to make sourdough without a Dutch Oven

Learn how to make perfect crusty bread without a Dutch Oven – yes, it is possible!
4.67 from 3 votes
Print Recipe Pin Recipe

10 thoughts on “How to bake sourdough (and any crusty bread!) without a Dutch Oven”

tell someone you love them with some fresh baked m

If you’re looking for a quick and easy lunar new

It’s almost the Year of the Rabbit and these bun

There’s something magical about a rainy day with